This is the first part of Inclusion Matters post series.

When we talk about diversity – it often reflects our own understanding of it. The usual definition of it is that it’s a state of being composed of various, differing, diverse elements. What are the diverse elements, though? For example, for a team of white men in their twenties a diverse new team member could be considered someone who either has a different gender, age, social class, or even a different skill set. There are so many possibilities to interpret diversity that it’s easy to say that we’re doing enough even if we’re concentrating only on one aspect.

In Inclusion matters series, when I talk about diversity & inclusion topics I want to touch it on all possible levels, trigger thoughts on any aspects that are relevant to you, and uncover some that may be new to you. In this article I will set the stage on what I mean when I use certain terms like diversity, inclusion, or privilege.

Diversity is understood better in the tech world these days. It’s something that companies target to reach, even if some do it more for marketing purposes and often it’s concentrated only around the gender ratio aspect, but it’s a good start. Some may see diversity more as an attractive feature to be considered a good employer, while others also embrace the fact that diverse teams can build high-quality products which are more thought-through, and inclusive. And exactly inclusion is usually going hand in hand with diversity when people talk about it.

Years back I did not fully understand why inclusion was mentioned together with diversity so often. Isn’t inclusion’s presence straight-forward? Only after some years of work experience and facing the pain myself I am now demanding more discussions about inclusion and how to improve that rather than talk only about diversity. Diversity is one thing – you may hire various diverse, amazing professionals, but how do you make them stay? How do you balance the inclusion so that everyone feels happy, is set up to be successful, and can be their full self within the team? This is exactly what I want to tackle in Inclusion matters series, but let’s begin with the first part of the equation – diversity.

Thinking of diversity & inclusion stories I remember one told by Ellen Pao in her book “Reset: My Fight for Inclusion and Lasting Change”. In the early days of Reddit, it was very much a company full of enthusiasts of Reddit. Employees loved it the way it was, so when a newcomer suggested supporting mobile (this was right before mobile was a must for a website to support), there were loads of resistance. People liked their product the way it was. The desktop version was enough, so why bother with a mobile one if nobody is going to use it? After a lot of fighting for mobile, the author managed to convince others to start supporting mobile, and it definitely paid off. This is just one tiny example of how someone who is different from others in their ideas can make a huge difference.

Sometimes being stuck to people similar to us – we may struggle with different ideas or people. It takes quite some effort to accept differences, but it’s definitely worth it: diversity drives experiments, innovation, and progress.

In my career, I witnessed multiple times where diverse teams had very steep learning curves and had a great delivery time. Also, I have seen how sometimes hiring for a “culture fit” ends up hiring (and expecting) people with the same ideas, and the environment, in that case, the company would stay very much in the comfort zone and… not change much. What kind of business wants to be stuck? For that – we need different kinds of ideas on the table.

However, diversity alone won’t solve the problem. Imagine being the one black sheep in the team who thinks something should be implemented while all others disagree. You may be a fighter, but just imagine trying over and over again to make your point. Imagine not feeling respected or included as much as some other people in your team, especially those who may repeat the very same points but their voices would be heard. Why do you have to overcompensate in that situation and try to convince people to believe you? This is especially common and painful in situations where not only your thoughts are excluded, but the effect of your looks or the way you are.

This can seem foreign to some. However, it’s exactly this feeling of exclusion that can make the greatest professionals leave their work. What is more, it actually can diminish the potential of great professionals and demotivate others.

So what is inclusion, what are the areas where we could be better at? I remember once seeing a video where a grandchild and a grandfather talk about life. One of the questions they got to discuss was “What is happiness to you?”. The grandfather said: “The feeling that I belong. Wherever it is.”. This is summarizing inclusion for me - if it’s an inclusive environment, I feel safe, I feel like I belong, I can be my authentic self, and I do feel happier.

There are quite a few possibilities to misuse some of diversity & inclusion concepts. These topics do have many dimensions which make it difficult to spot some of inclusion’s issues. Oppression is one of the most painful non-inclusive acts that there are, and it has many faces. There will always be a struggle to feel included if someone is oppressed.

Some of the unjust behaviours coming with oppression are not consciously understood. Privilege and power play a huge role in oppression. This is where some misuse of terms come into play. Privilege is a right or immunity granted towards a certain person or group of people.

To understand privilege & oppression better we can look into the concept of 4 I’s of Oppression (short video explaining it using legos). Let’s look into patriarchy as an example of oppression. It all started on an ideological level, having men in power and seeing women as a “weaker gender”. Historically institutions reflected that in forbidding women to enter university. While some interpersonal oppression occurrences still happen nowadays when “boys clubs” are formed in certain businesses thinking that women do not belong. And, lastly, there are some women who say that they dislike working with other women as they’re all about gossip (this is an internal dimension of 4 I’s of Oppression). 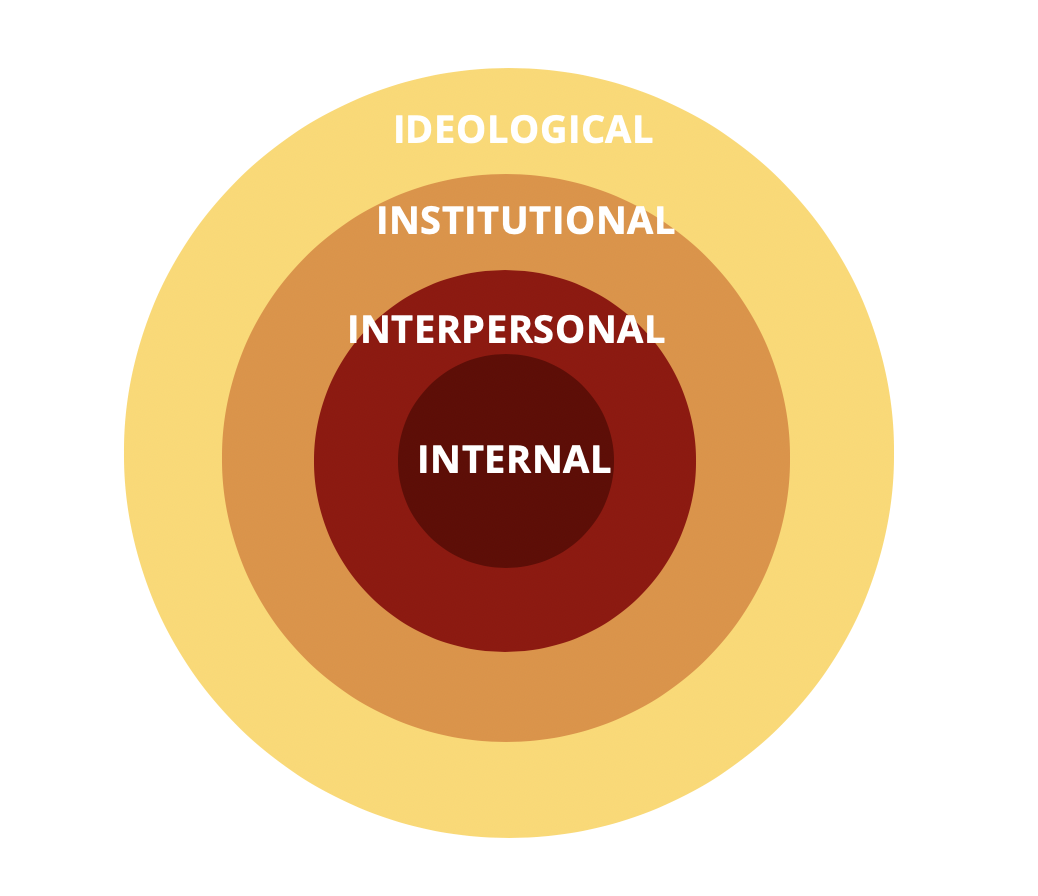 All of the I’s are affecting each other. However, they are all at different levels - it can be way more difficult to change ideology than it is to change ourselves. One thing we can do for sure is to acknowledge them, and be aware of it. People who benefit most from these systems are people who internalize privilege. This means that we have to be careful assuming about other people and how they feel - we may not be facing the same oppression they are.

In the general terms by Chinook Fund there is this quote:

“Most people in the dominant group are not consciously oppressive. They have internalized the negative messages about other groups, and consider their attitudes towards the other group quite normal.”

When we are privileged and consider something to be normal - we may not notice the pain it causes others. This is especially true when it comes to diversity and inclusion. Diversity is very important, but how do we make sure we do not oppress others and make people feel like they belong?

In the next post in the series Inclusion Matters: [Part 2] Common Inclusion problems, I share some stories, and introduce some of the most common inclusion problems that maybe are not seen by everyone, but felt daily by quite a few.

Quality is NOT perfection